In their Facebook page, Delfinarien-Info has published a comment of an expert, which we wanted to share with the general public taking into account constant and ungrounded criticism by extremist animal groups, with the support and encouragement from Ingrid Visser, towards the orcas kept in Loro Parque.

It turns out that in reality Mrs. Visser, who has recently undertaken to give care to the stranded orca calf, has committed unthinkable number of blunders, including not having performed a post-mortem study of the animal, which could have been a very important opportunity to obtain vital data to help other orcas and whales in the future.

What happened in New Zealand has caused a lot of commotion in recent days. However, I have not given my opinion about it because we are not like those who hate dolfinariums hysterically, nor are we activists for animal rights. Secondly, I use this report to demonstrate to this completely unprofessional and radical woman how a true scientist works: you wait for the results before you publish anything.

The addressee of my criticism is Ingrid Visser, a cetacean researcher. This person tried to spread a touching story about an orca baby and its rescue. Why tried? Well, because the little orca has died in the process. Ingrid Visser has no better to do other than to spy on dolphinariums led by the approved scientists and to discredit their professional and successful rescue programs. Such is the example of Morgan, the young female orca that was rescued on the Dutch coast by experts of Dolphinarium Harderwijk. Again, successfully.

Ingrid Visser criticizes the captivity of dolphins and orcas. This is the reason why she insisted that New Zealand orca, named Bob, upon its rescue, should upon recovery, under any circumstance, be returned to the wild. Any whale rescue expert would tell her now that we must proceed step by step, and do not skip the protocol to the last phase. Of course, this is only a personal opinion. Rather, we must consider how a killer whale can be released into the wild after being pampered and treated like a pet. The pathetic way Ingrid Visser use to treat wild orcas, has been in this situation absurd.

Can you rescue an orca only by talking to it or “stimulating it” using the people being present in water around it, as expressed by Mrs. Visser? Absolutely not! That is the biggest mistake you can do if you want to rehabilitate and release successfully an animal. In the SOS Dolphin rescue station in Harderwijk, I have observed many times how proper rehabilitation should be done. If an animal can swim autonomously, no human should enter the water. A man can only interfere when feeding or giving medical care to the animal. Man should not even be on the edge of the pool. Every human contact for a wild and ill orca is enormously stressful.

The ignorance together with the numerous lies of this woman are unthinkable. For example, she states that the orca was placed in a pool (without filtering!!) in an undisclosed location. However, in all published images you can see dozens of people around the small pool. Of course with cameras and mobile phones. People coughing, sneezing, talking and laughing. And all this just a meter away from the young weak orca. Thank you for all these agents and germs.

Ingrid Visser is not seen in any photo using a mouth cloth or gloves. In comparison, I show you how patients are treated in Texas Marine Mammal Stranding Network: 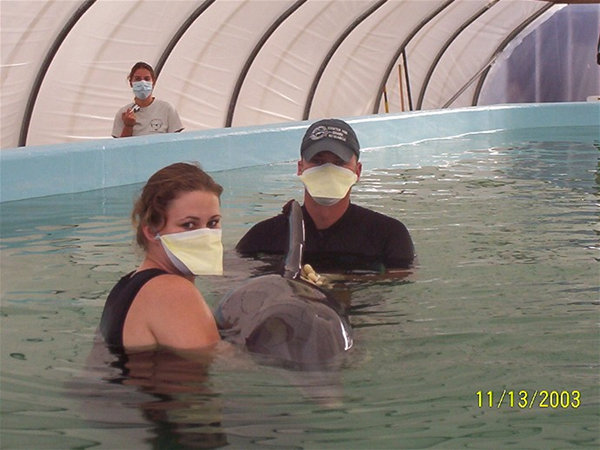 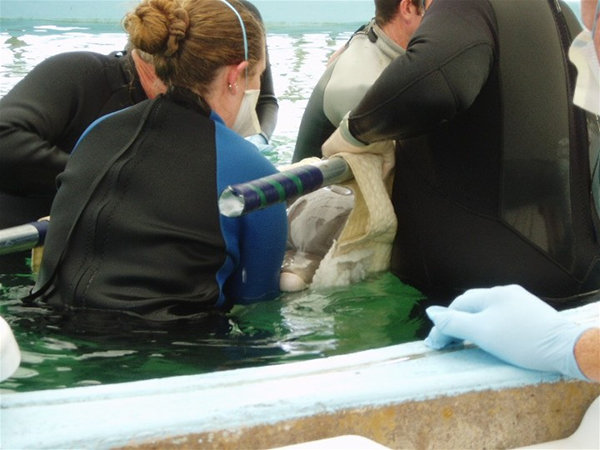 This is especially embarrassing because Ingrid Visser has spied on SeaWorld Parks multiple times where she recorded their practice sessions. She complained, among others, about certain medical training that was performed without gloves. Ingrid Visser must believe to have healing hands and therefore not needing gloves (unfortunately, the results have proved otherwise), or it simply did not occur to her.

There arise, however, further questions. Just a few months ago, there was a publication, which stated that Ingrid Visser received a total of $ 1.2 million from an American multinational toy company in grants for orca projects. Where is the money? The tiny pool for such a major rescue operation could not have cost that much. Just as with all the other animal rights organizations, the money here disappear mysteriously.

This orca’s death is tragic. The chances of survival were minimal and dolphin rescue teams also lose many patients. But scientists can learn from mistakes. This is not the case of Mrs. Visser. Instead of requesting an necropsy, the orca was buried immediately. It is not the first time that dead animals in captivity by extremist activists disappear mysteriously. Ric O’Barry has also prevented the post mortem study of the animals. Unfortunately, we can no longer find out why Bob died. A disgrace for a woman who calls herself a scientist.

As this publication above shows, the circumstances of the tragic death of the orca calf “Bob” in New Zealand leave many unanswered questions about the care that was provided to him!

We must further underline that the necropsies of the diseased whales represent high scientific value and significance! They are the source of information about the illnesses that were affecting the animals and can even provide the reasons of their beaching or separation from their groups.

In fact, it would be a huge blunder not to perform any type of post-mortem study on this young orca. It could be an opportunity to help other orcas in the similar situations in the future.