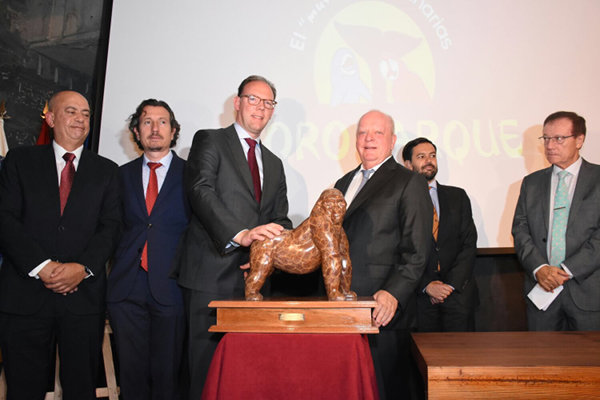 Last Friday, October 20th, the presidential office of the Canarian Government hosted Loro Parque´s award ceremony ‘Premio Gorila 2016’, during which the company Versele-Laga was awarded with this prestigious recognition. This Belgian corporation is an internationally known manufacturer of high-quality food and care brands for animals and pets. This annual award ceremony took place in its 14th edition and aims at recognizing exceptional performance, environmental responsibility and active implementation of the strategies towards the sustainable use of resources.

This event was hosted in the main Auditorium of the Presidential Office and it was attended by almost three hundred guests. Among those who attended the ceremony were regional, insular and local authorities, as well as civilian, military, consular officials as well as business representatives.

The President of Loro Parque, Wolfgang Kiessling, stressed the importance of the Versele-Laga’s labour, as the company sponsors Loro Parque Fundación in their efforts dedicated to the conservation of biodiversity. Versele-Laga’s principles match exactly with the philosophy of Loro Parque and that is something that is highly important in a world where human population is increasing disproportionately to the amount of the natural resources. As a consequence, the natural habitats of the many wild animals are quickly deteriorating leading to the disappearance of many of these species.

There is more than one reason why Versele-Laga has been awarded with ‘Premio Gorila 2016’, whose representative, Mr. Lode Versele assessed to be ‘really proud to be one of the main sponsors of Loro Parque Fundación’ and told the attendees how ‘Loro Parque’s vision about the conservation of nature was aligned to that of their company. Versele-Laga, which has been collaborating with Loro Parque Fundación for 15 years, considers the labour of scientists and of those who love and dedicate their efforts to nature as key for its preservation. Among many other initiatives, the company has also been supporting foundation financially as a way of contributing to their cause.

The company started with Prudent Versele, a visionary entrepreneur, who started to produce and sell cattle nutrition products on a small scale in 1932. In 1937, less than five years later, in order to meet the demand, he had to build his first cattle feed-producing plant in Deinze, Belgium.

The following years were successful; the factory expanded further and even became one of the most modern and best performing ones of its time. The passionate employees who worked for Versele-Laga soon managed to convince the Versele family to develop mixes for racing pigeons.

They were soon followed by products for other sporting animals and pets such as birds, farm animals, horses and dogs. Since the 70s animals increasingly became part of the family and more and more birds, rodents, dogs and cats were taken into people’s homes.

Versele-Laga follows all the market developments very closely and accompany them with new investments. Thus, they can provide increasingly better answers to the needs of the pets and performance animals.